This travel guide, the first in a series of posts, is all about Seattle, the city built around water and mountains. Even if you’re not traveling there in the near future, I wanted to share some of my favorite sights and experiences, and provide suggestions on the amazing food (of course) in case you ever need some tips. In the summer of 2013 my husband and I went on an epic 18-day trip from Seattle to Olympic National Park to Juneau to Anchorage. One post will not accurately sum up this grand adventure, so I am splitting it into several parts – first stop, Seattle.

I fell in love with Seattle rather quickly. This surprised me since we were only there for a short time. (It may have been all of the incredibly fresh seafood.) But more than that, we visited the city on those lucky summer days when the sun was beaming and the air was clear. Everywhere, there were glimpses of blue water or a distant mountain.

Between my husband and I, we packed two large suitcases and the biggest camping bag known to man (for the entire 18 day trip). The bag carried our tent, sleeping bags, camp stove, etc. – and was probably the most cumbersome bag in existence, which took two people to haul. To make matters worse, we were late. We began our trip by running/lopsidedly bungling our way through the train station in DC, arriving with zero minutes to spare. We were already exhausted as the journey began, on our way to the airport. But also exhilarated to start such a journey. We landed in Seattle at dusk, surrounded by beautiful views.

A late start seemed to be our theme in Seattle. We stayed with one of my oldest friends, and our introduction to the city started at 11pm. We first checked out the Capitol Hill area and stood in line for the Unicorn bar, which ended up being one of the most fascinating bars I’ve been to. There was something curious every which way you looked, and it was also featured in a Macklemore video. Oh, you didn’t know that Macklemore was from Seattle? Five people will probably mention him within your first hour in the city. 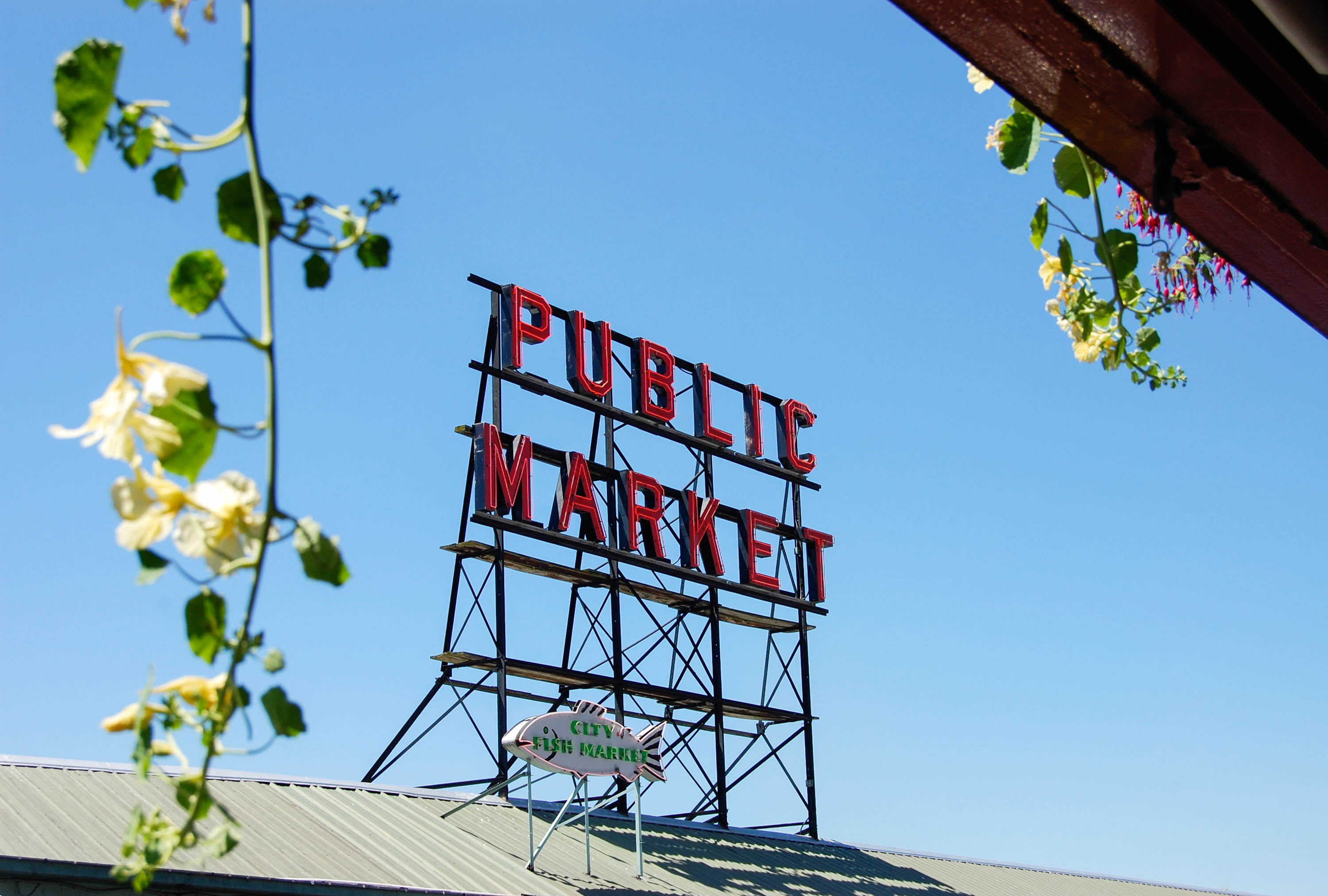 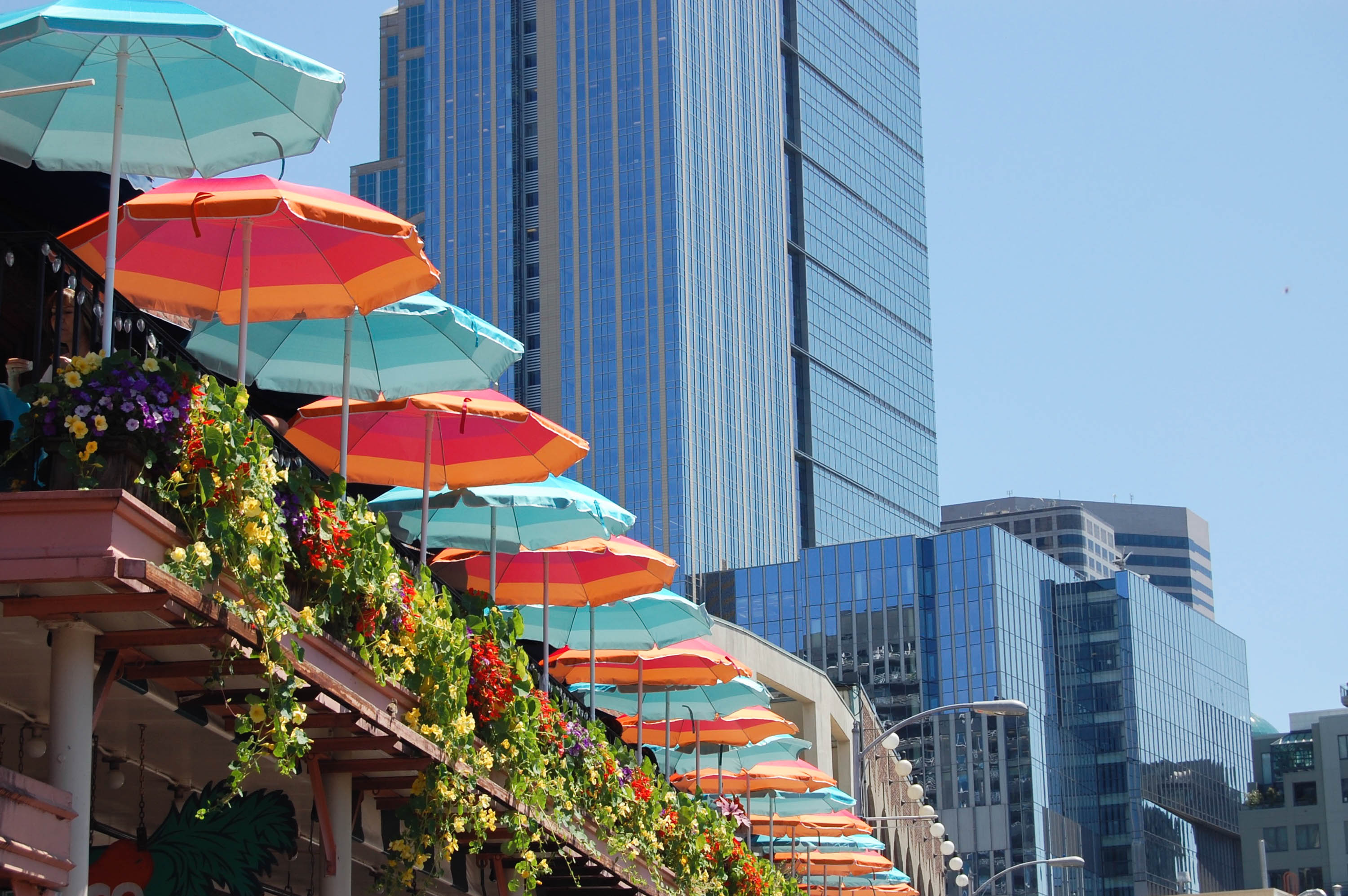 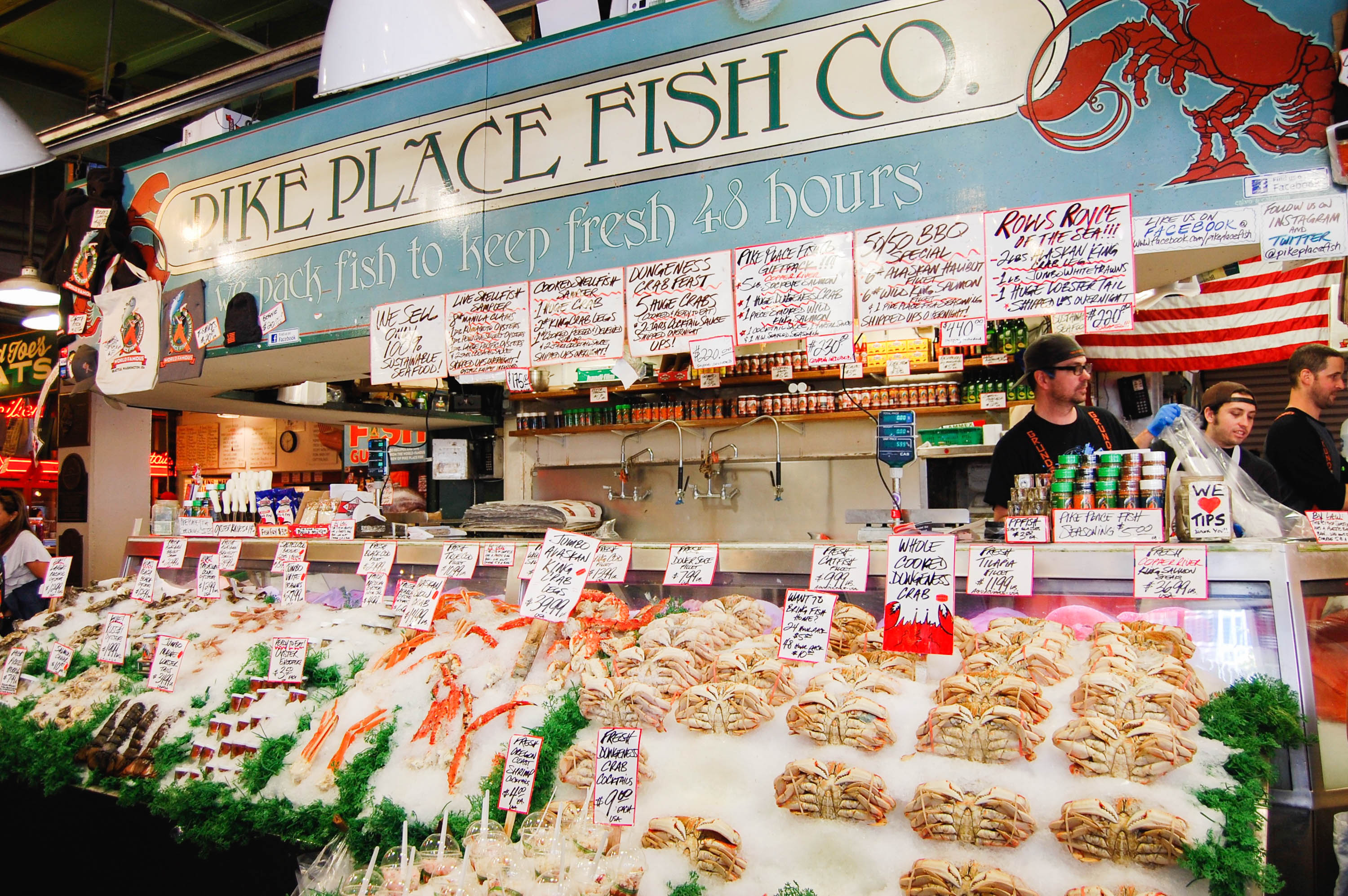 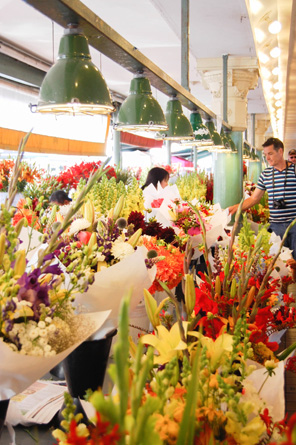 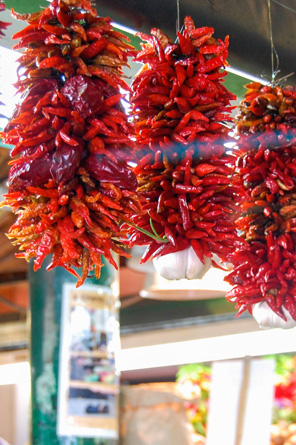 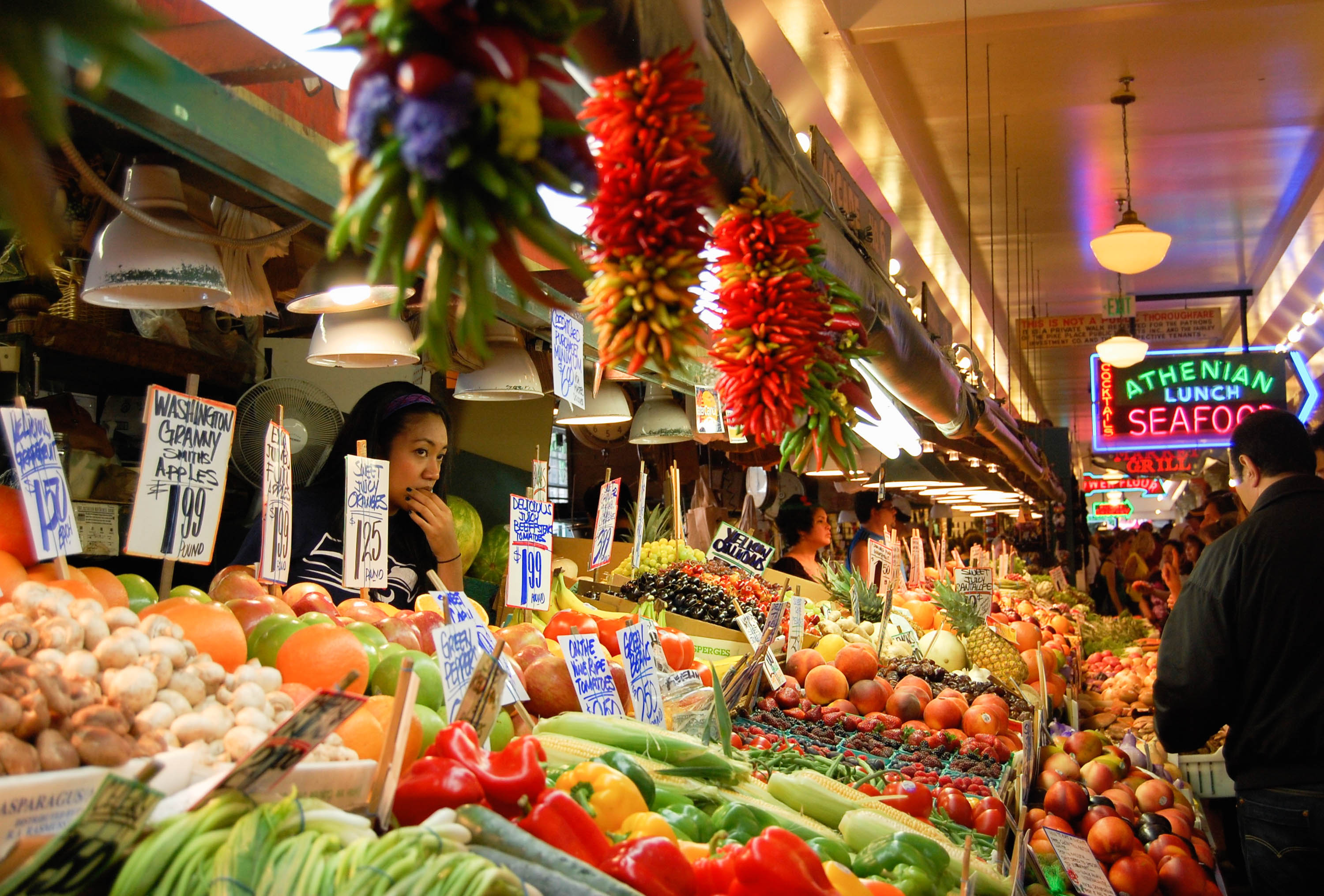 On our first full day in Seattle, we got a late start (obviously, considering the night before). We headed down to the iconic Pike Place Market, which was a high priority on my list. The vibrant market had a bit of everything, from men tossing fish, to beautiful flower stands, to flashy souvenir stalls. It was full of color, and activity, and oh yeah – a lot of people. It’s popular for a reason though, with something for everyone.

If you’re looking for squeaky good cheese curds, stop into Beecher’s. Look in through the windows to see the artisan cheese being made right before your eyes. Or you can place an order at the original Starbucks, though the lines might be deterring.

After the market we walked down to the waterfront and decided to try Seattle’s Great Wheel. Although it was expectedly overpriced and the line was long, this giant ferris wheel was worth it. The day was spectacularly clear and we had stunning views, not only of Seattle but of Mt. Rainier. We were suspended high above the water and could look around at 360 degree scenery. 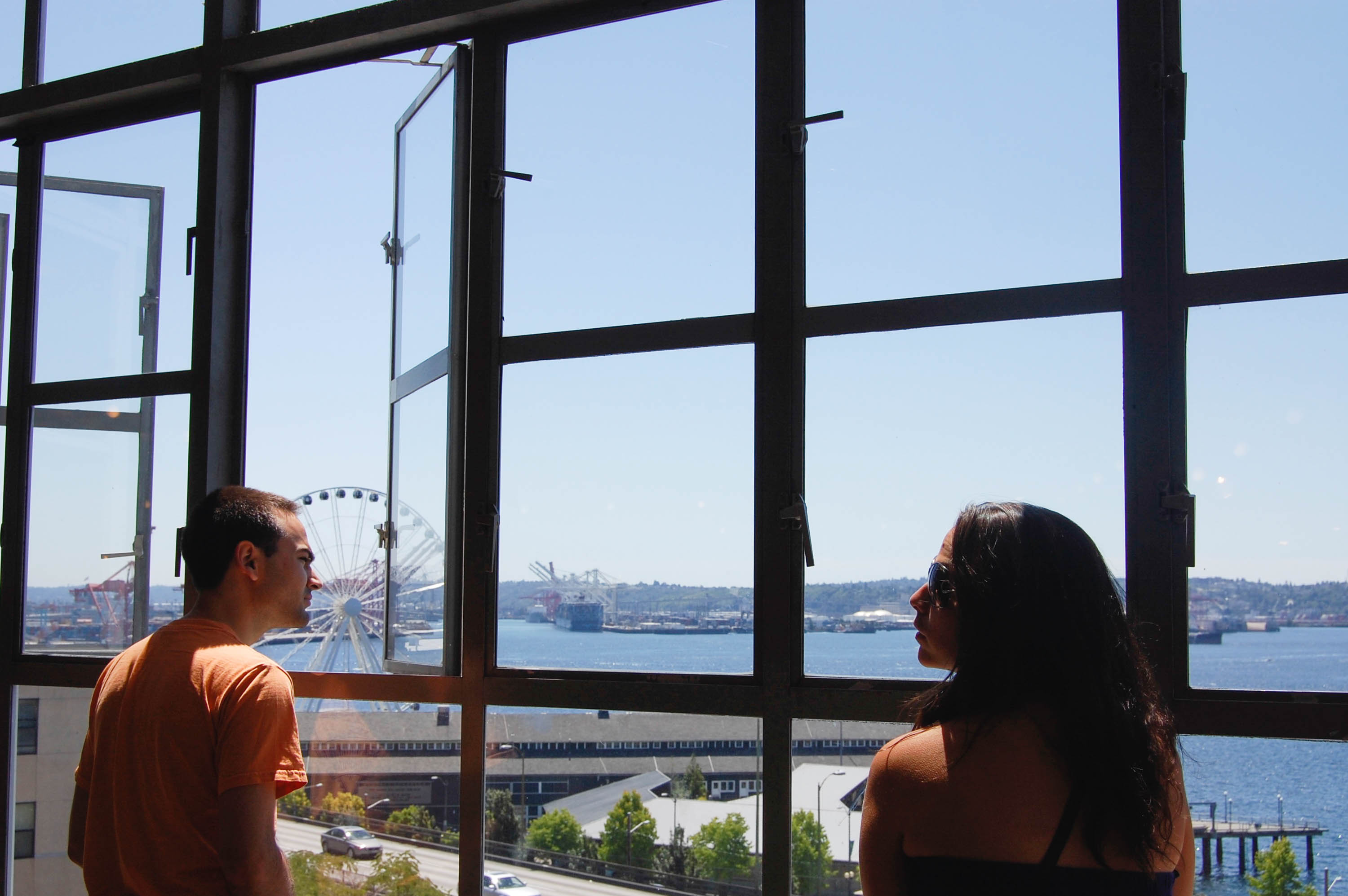 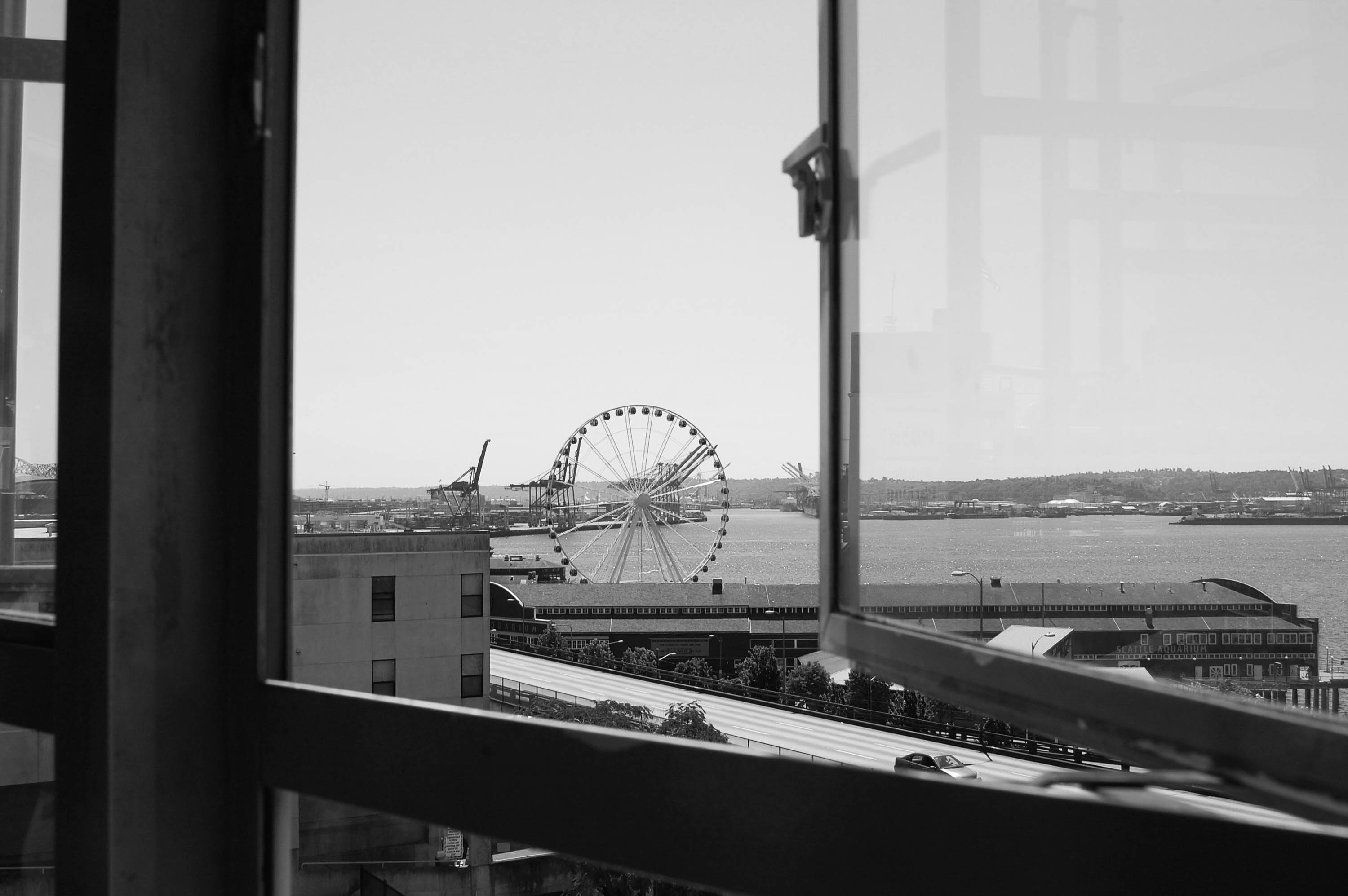 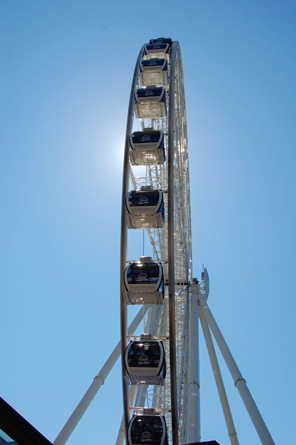 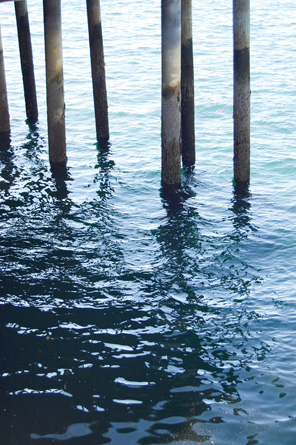 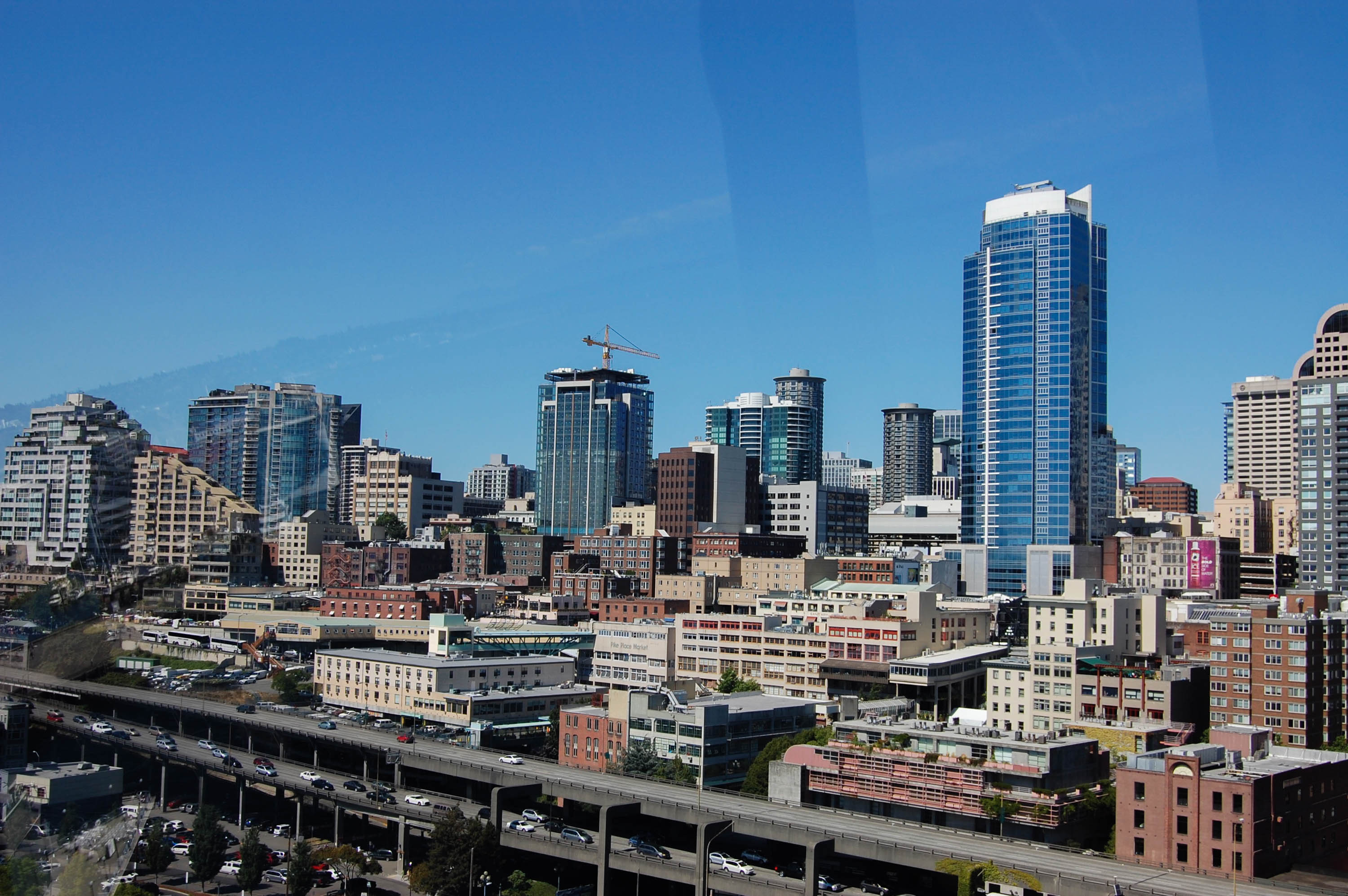 From there, we had a cross-city bus …experience, to put it mildly. The bus was useful for getting around other parts of the city, but to get to Alki Beach it proved a challenge. (We actually used Car2Go the majority of the time in Seattle, which was much cheaper than a cab and easier than a bus.) The beach we arrived at was a long, narrow stretch of sand that overlooked both Seattle and the Puget Sound. We were very happy to relax there for a few hours until the sun went down. Skip dinner at Duke’s, where we ate, and instead grab something to eat right on the beach. 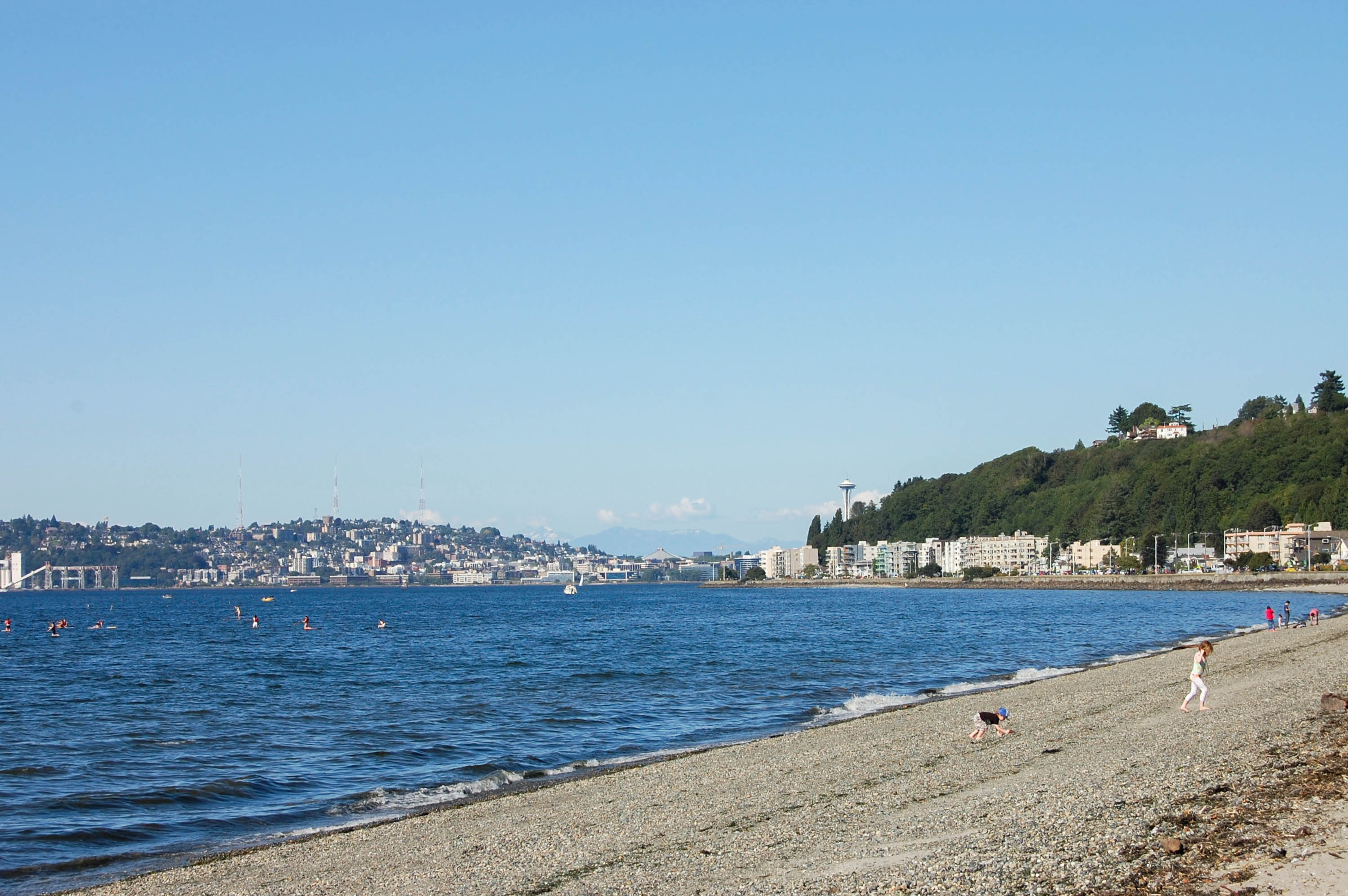 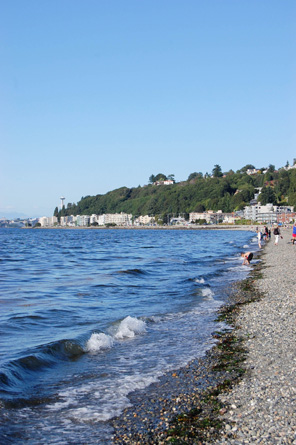 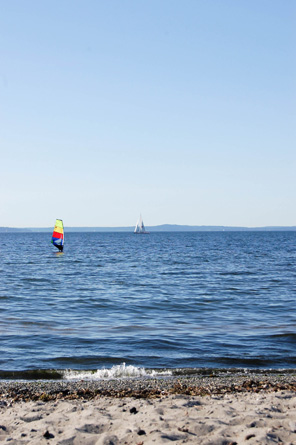 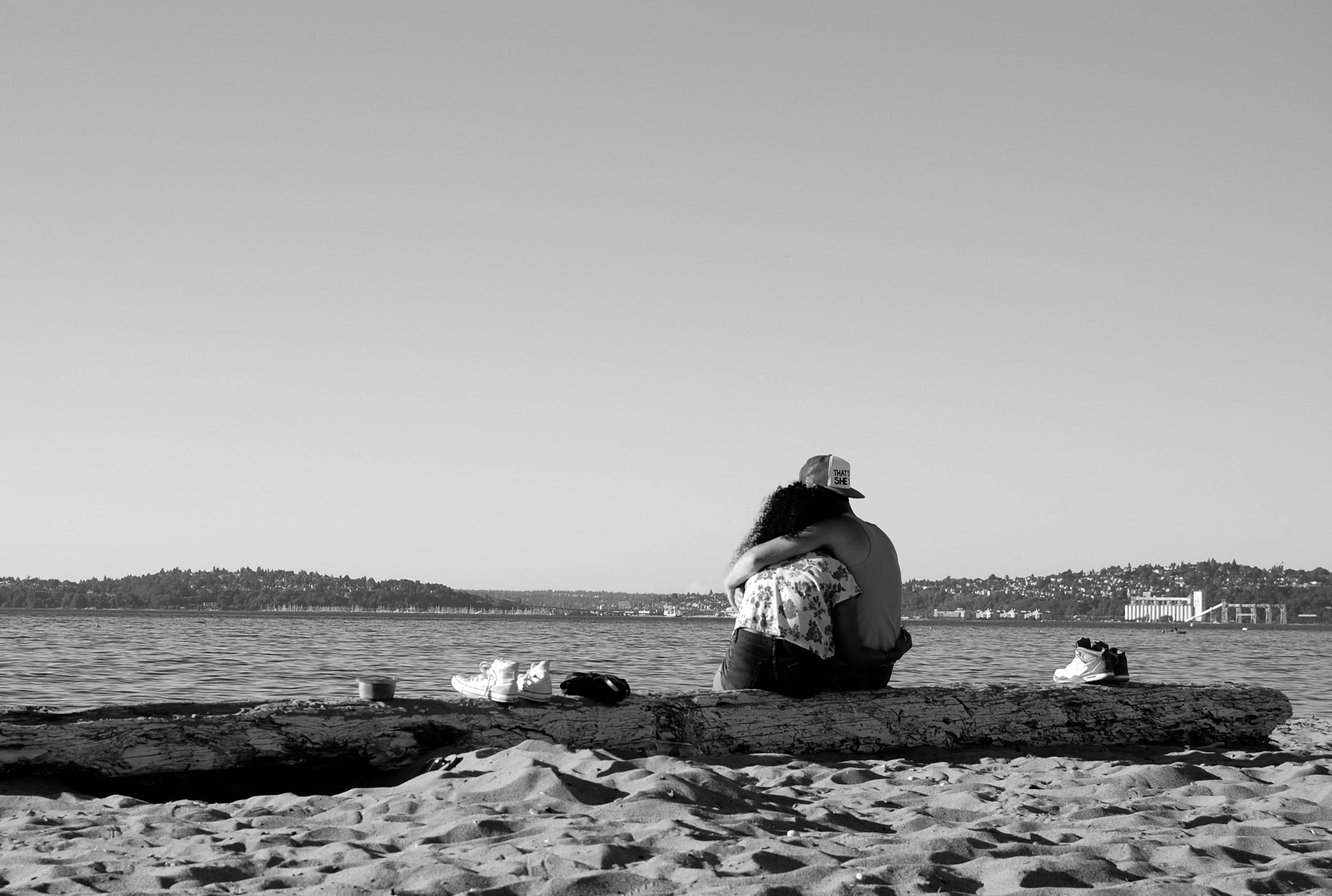 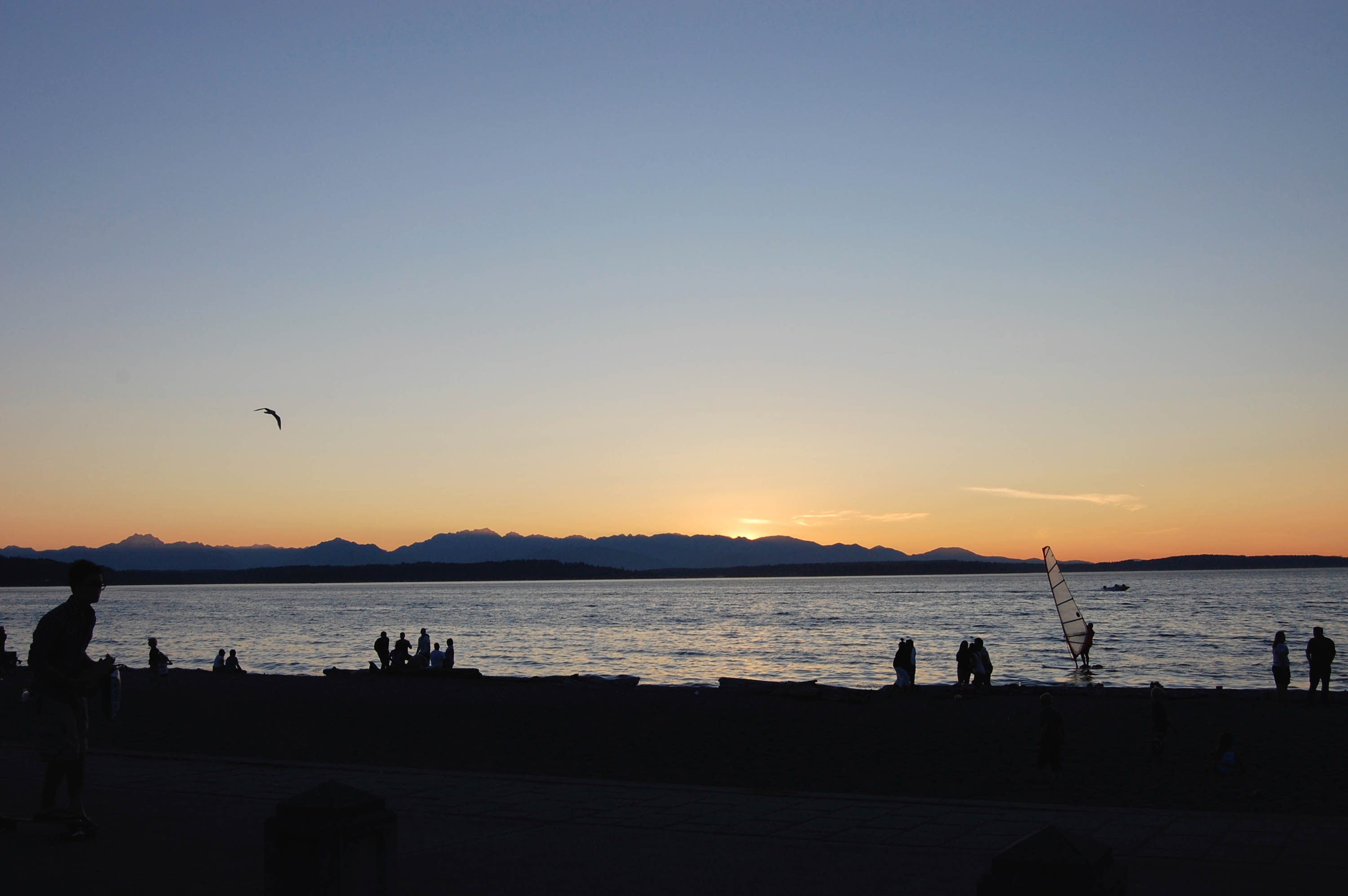 The next day, we visited the Ballard Farmers Market. In a stroke of complete luck, it was also the annual Seafood Festival celebration. You should make a point to go if you live in Seattle. We were greeted at the entrance by a giant metallic fish, on yet another sunny and bright day. There were countless stalls and we greedily tried every free sample available, which lead to the purchase of some delicious and sugary wine slushies. We also stopped to watch more men slinging fish about, and I began to suspect that they were everywhere in the city. Then we arrived at the main attraction: the Chamber of Commerce Salmon Barbecue. The salmon, garlic bread, and coleslaw were so good that we went back for a second round. It made me wish that my local Chamber of Commerce offered salmon barbecue. Combine the barbecue salmon with the wine slushies, and I’m pretty sure that was the point I decided to move to Seattle. (Even though I had not experienced one drop of the rain and fog that Seattle is known for.)

The day was just beginning though. Luckily my husband possesses a knack for navigating around a city he’s never been to. We went down to the water to walk around and spied the famous Fremont Troll. It was interesting to see, hunkered under a massive bridge, but it was swarming with people. Literally, people were climbing all over the troll. 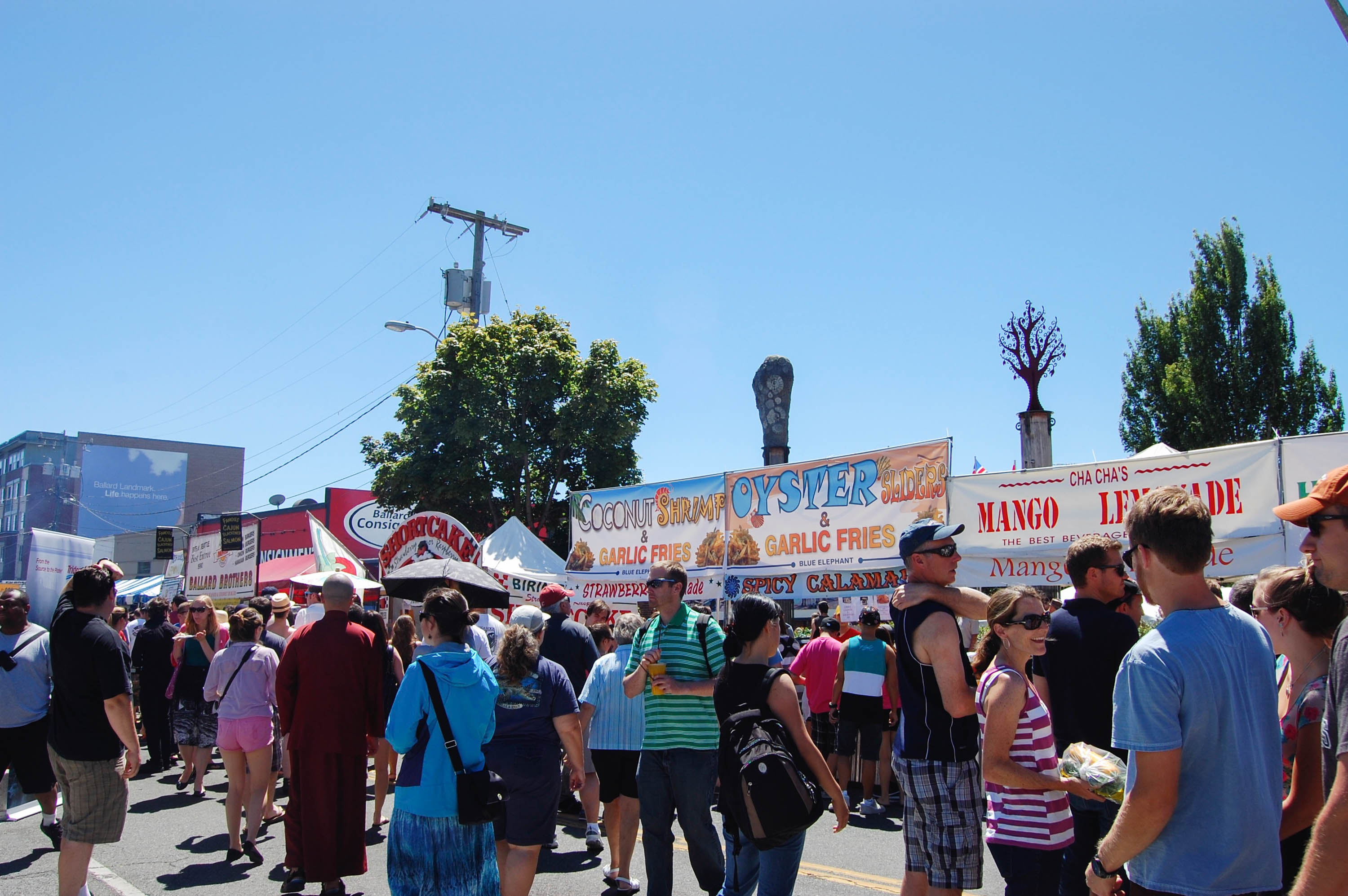 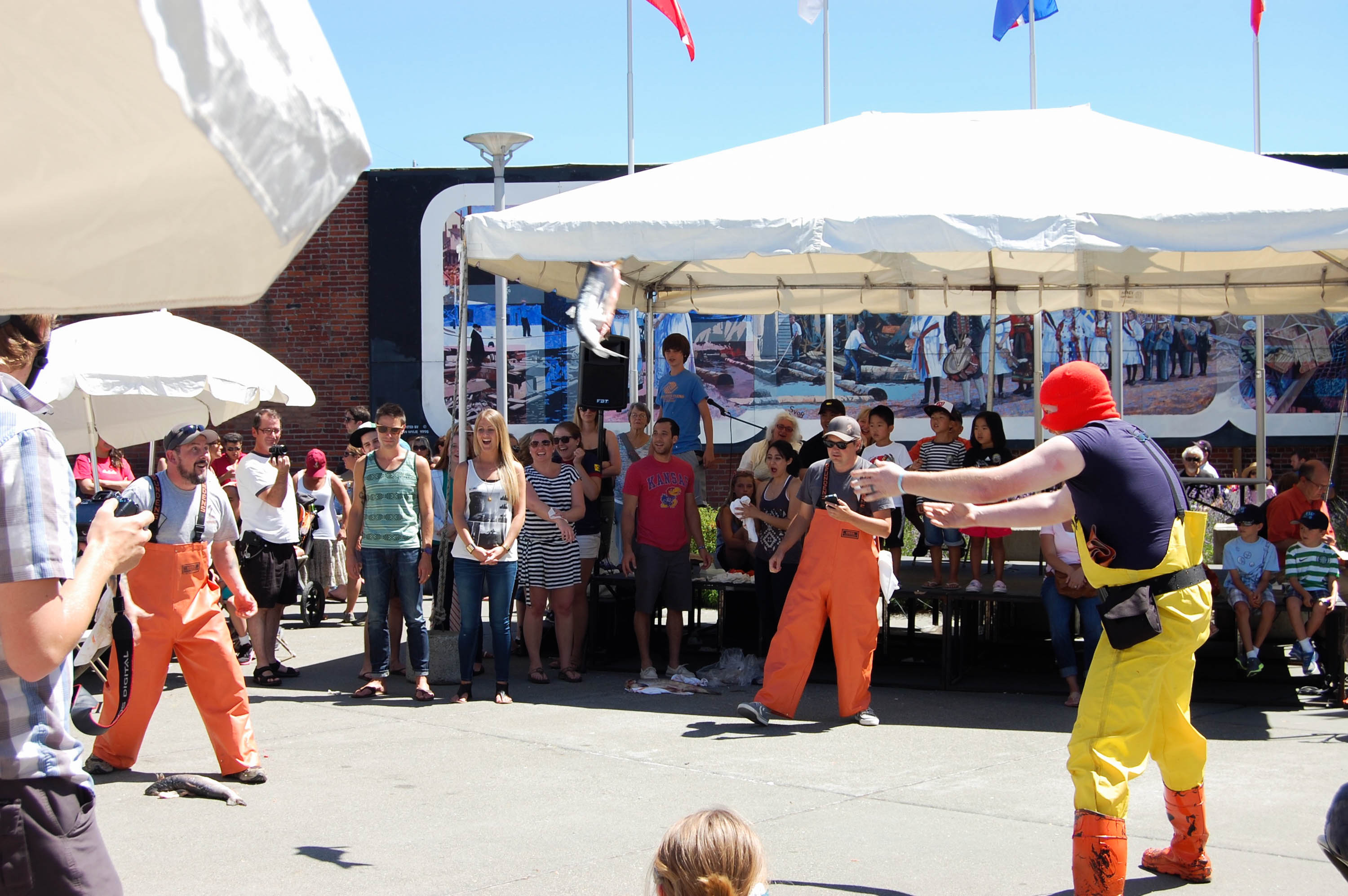 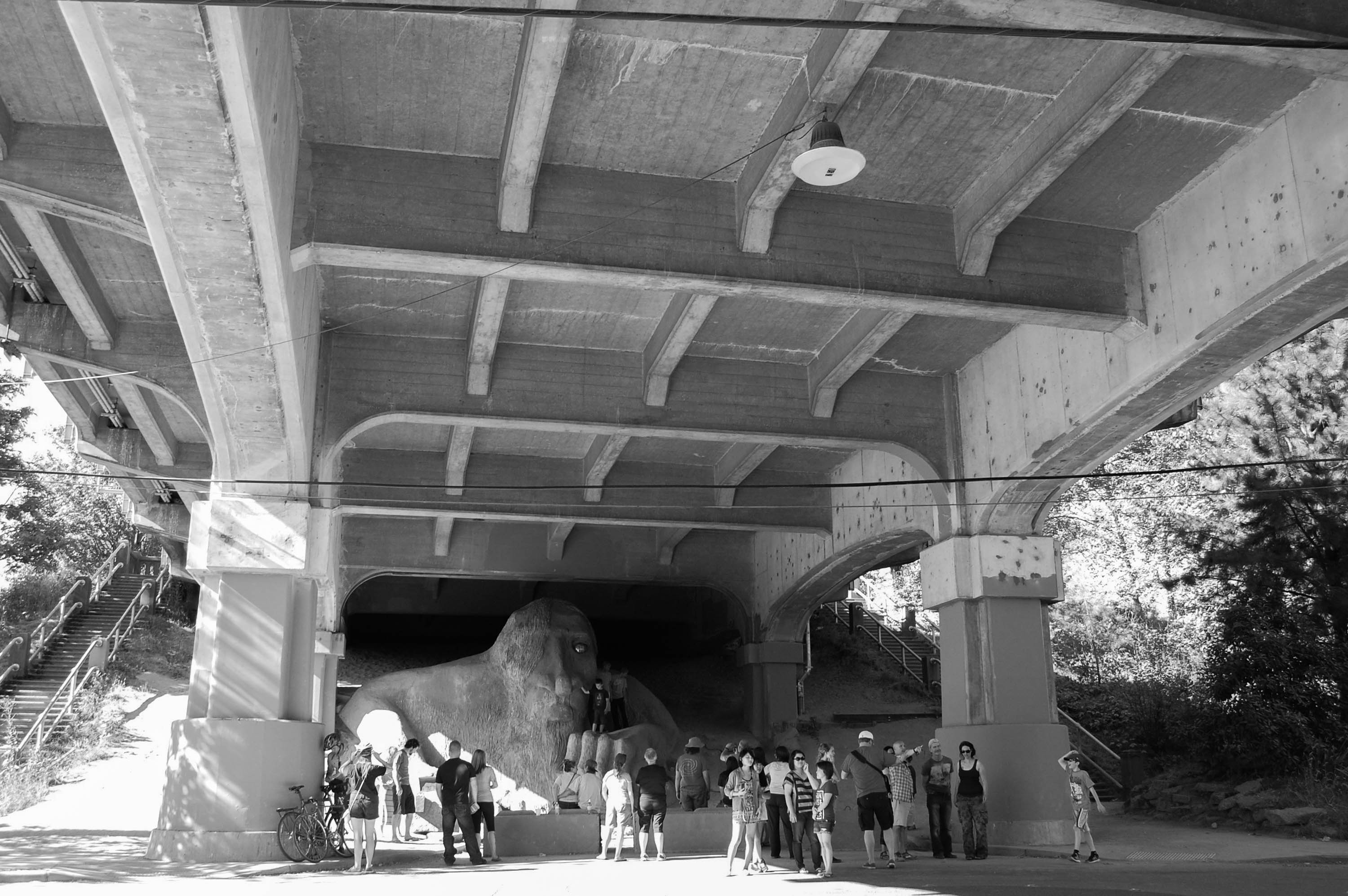 The final stop of the day was Gas Works Park. The park is unique in that it is an old coal plant-turned public park. This is a must-see, especially because of the incredible panoramic views of the Seattle skyline, including the Space Needle.

People were flying kites, playing frisbee, having picnics….it was basically the perfect postcard for a Seattle tourism ad. It also happened to be an ideal spot to channel our inner child and watch the float planes take off and land. Eventually we headed back to the Green Lake area to meet up with our friend, who took us to Pies and Pints. The pub and restaurant featured live folk music in the background and served up savory pot pies. The chicken pot pie and side of mac ‘n cheese guaranteed that I would be a regular if I lived nearby. 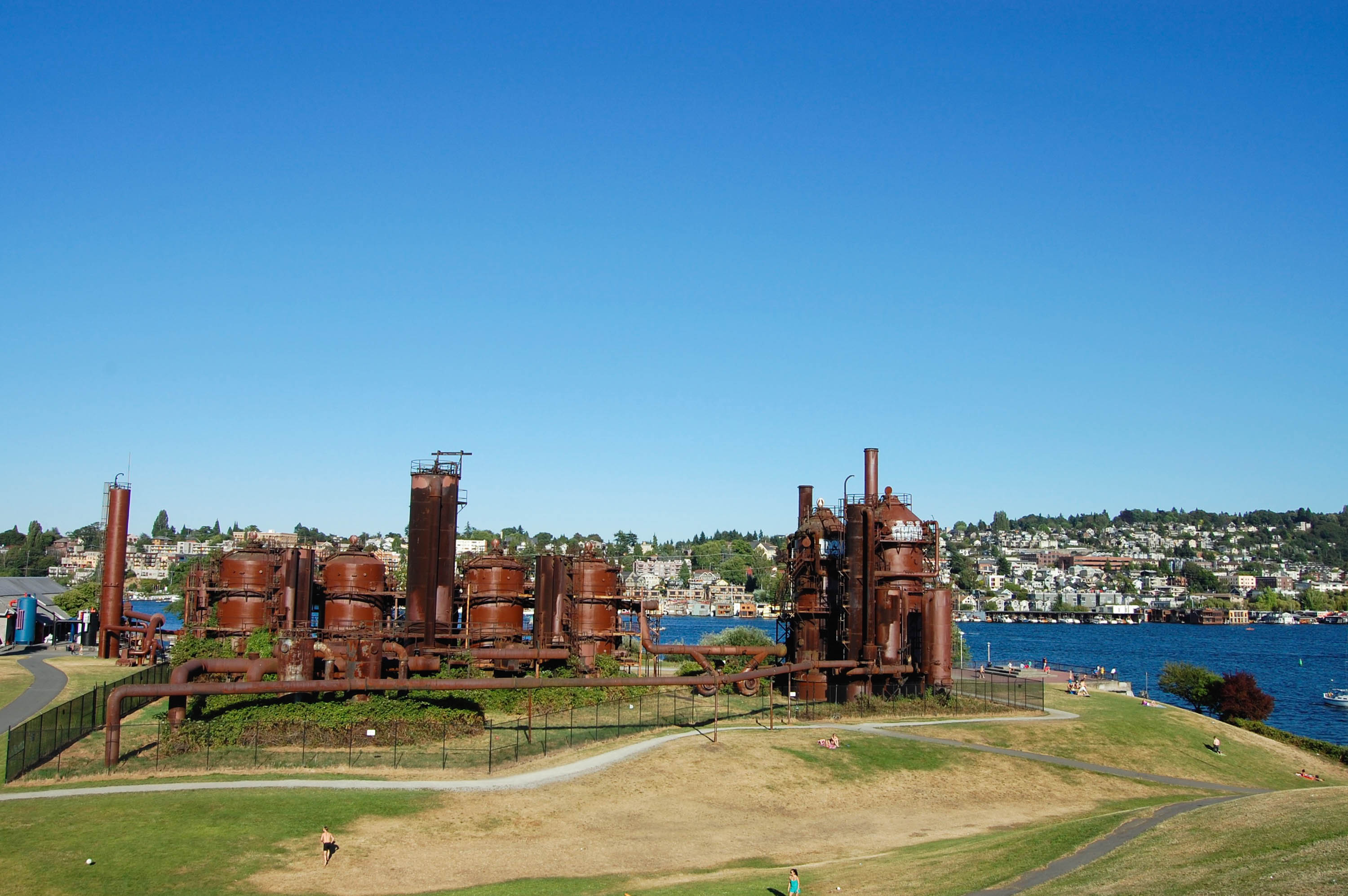 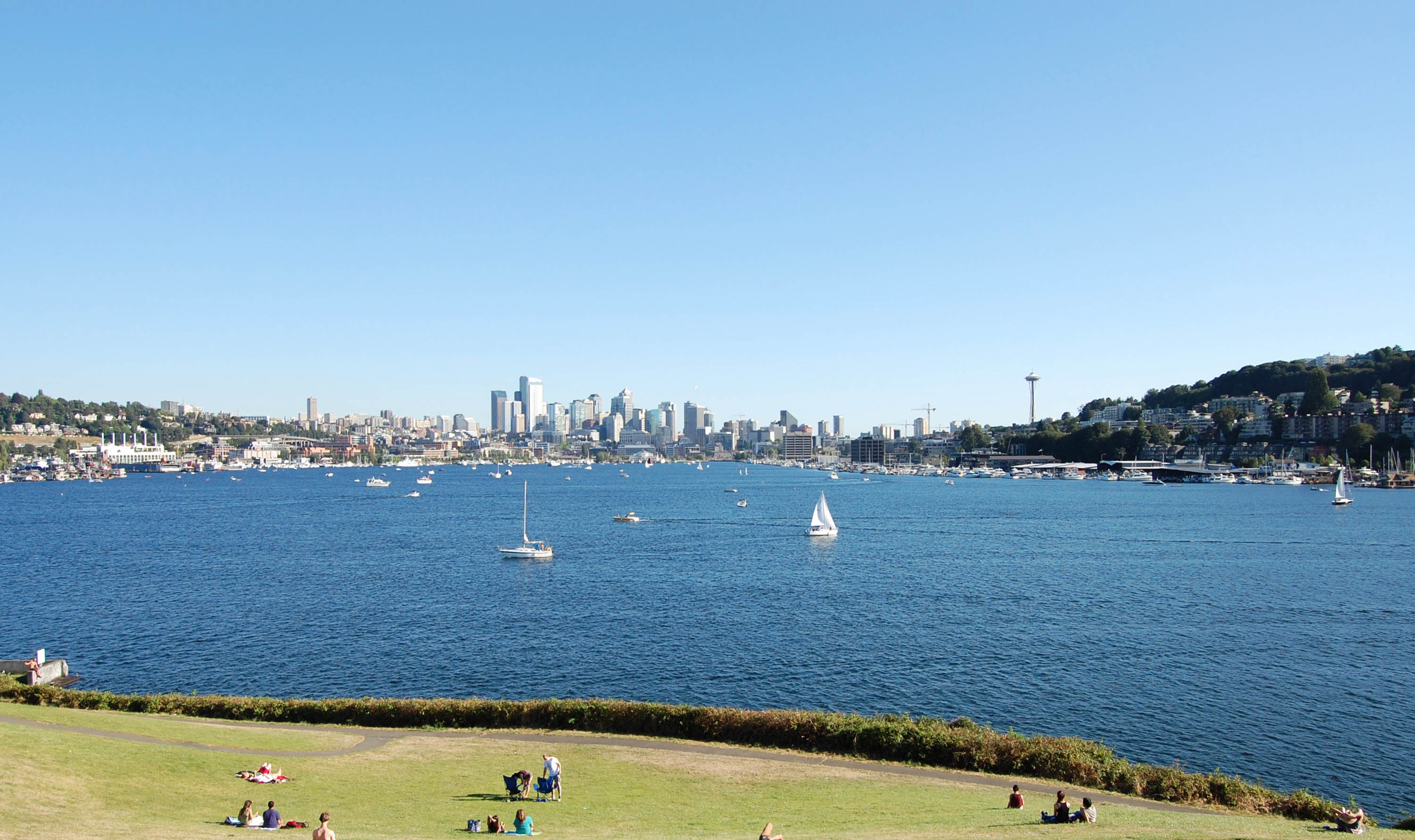 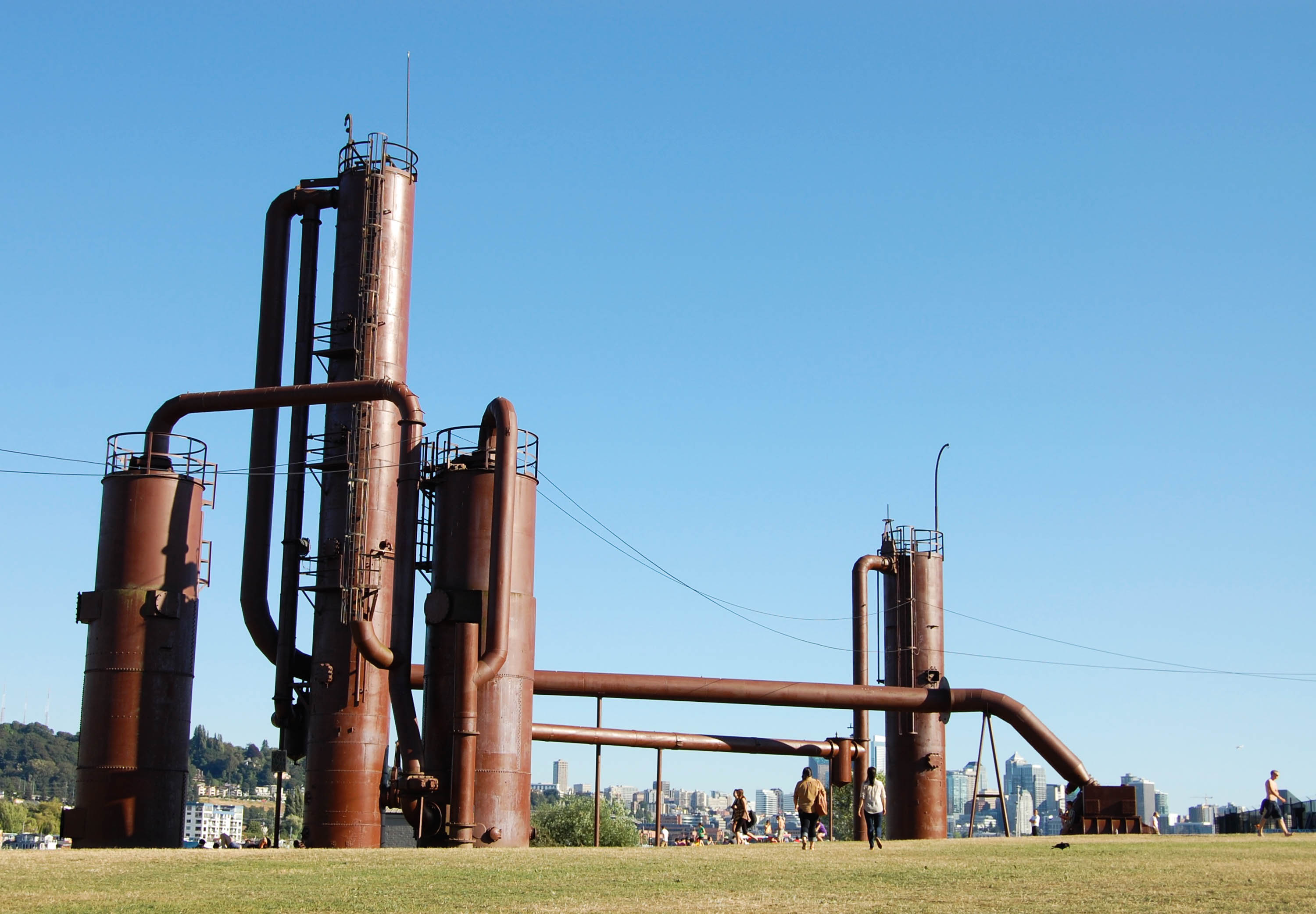 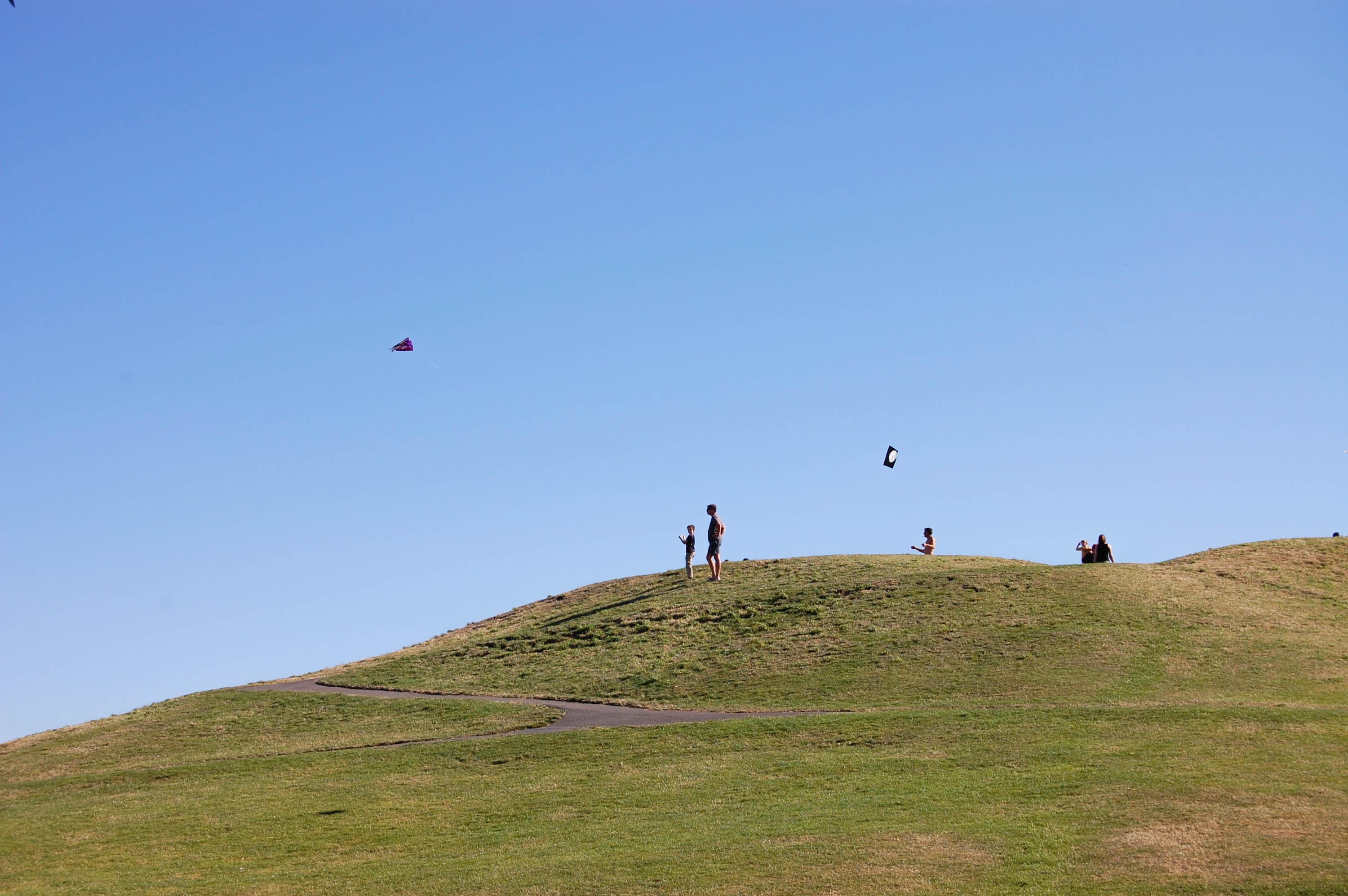 On our last day in Seattle, we strolled first through the Olympic Sculpture Park, and then went up to the Chihuly Glass Gardens. The Chihuly exhibit was probably my favorite experience in Seattle. Every room featured more and more exquisite glass sculptures. At the end of the exhibit, or what you think is the end, you walk into a large glasshouse with a sculpture suspended above you, perfectly framing the Space Needle. Then the tour continued outside, in a glass-filled garden.

On the recommendation of my friend we skipped the Space Needle tour, and I am glad we did. There was so much else to see, and I believe we only scratched the surface. I suppose I’ll have to return. 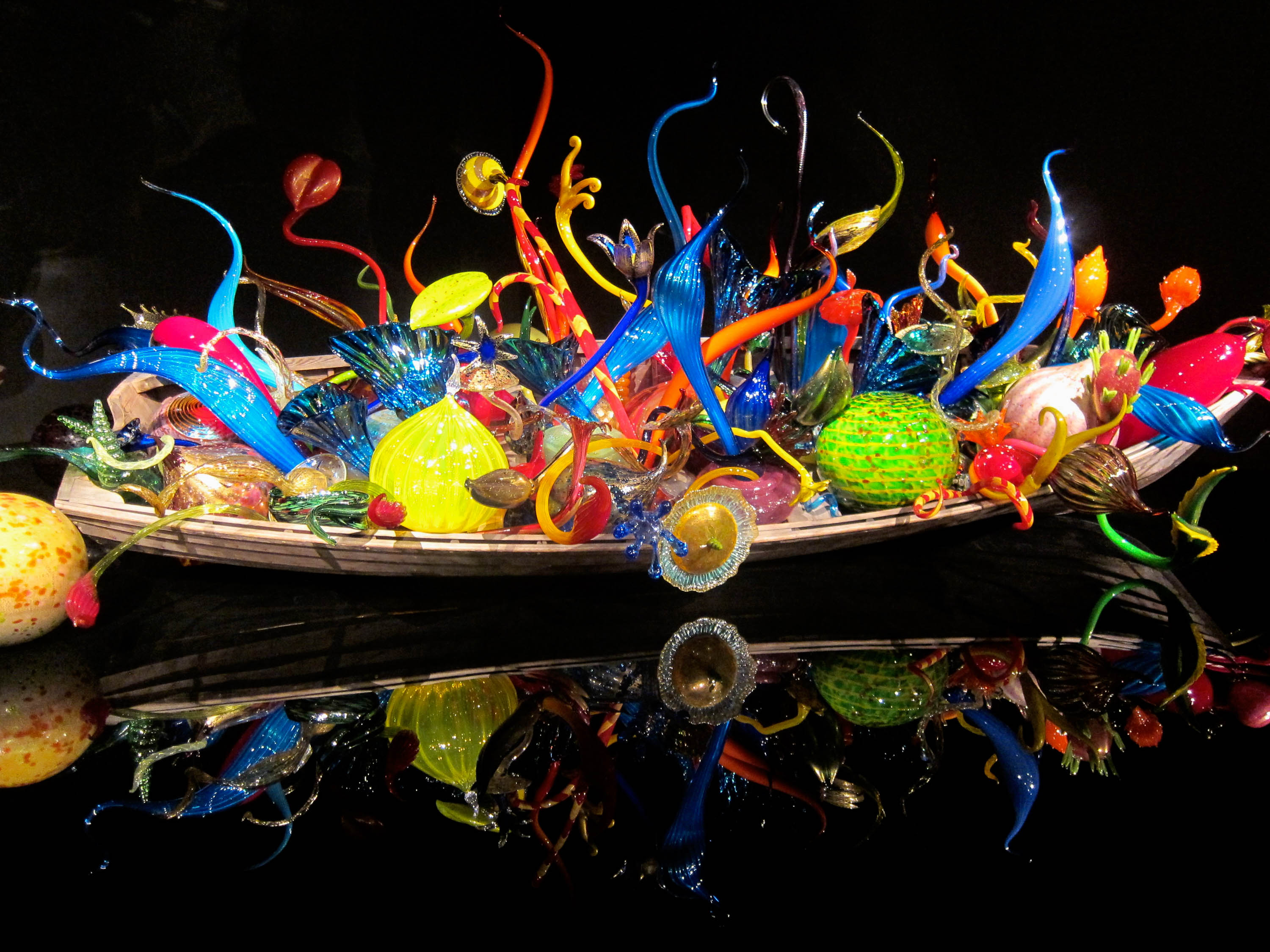 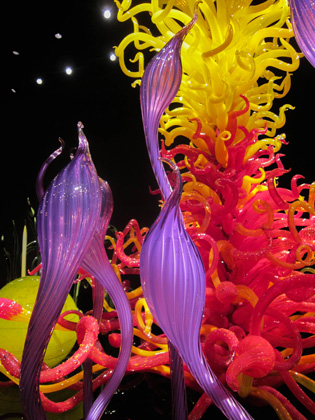 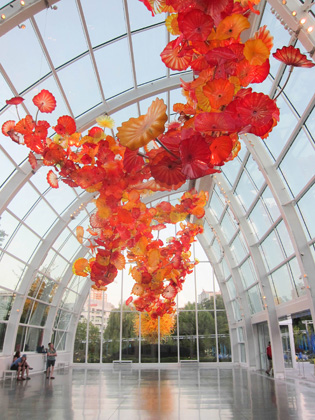 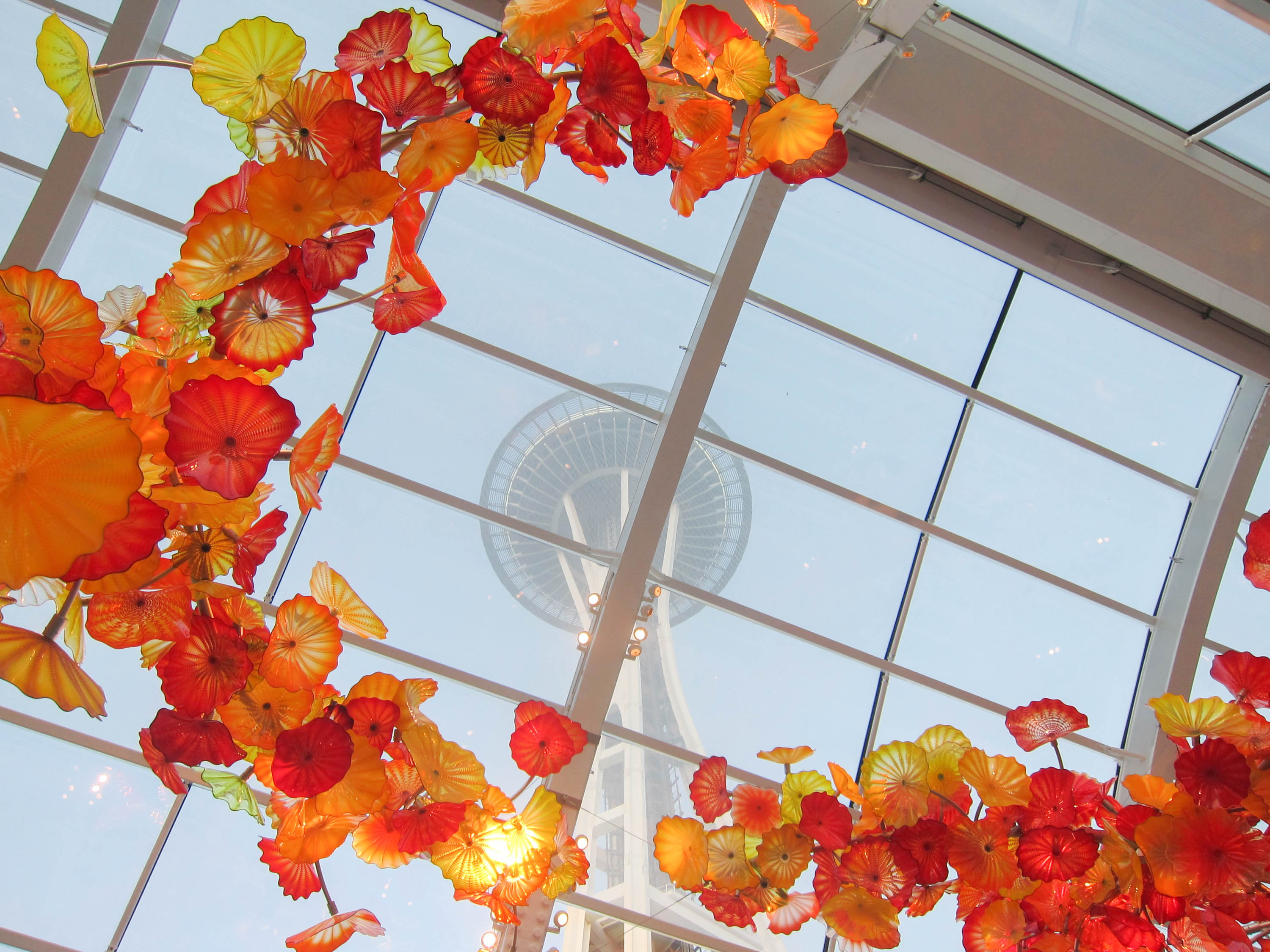 The next step in our journey was to rent a car to drive out to Olympic National Park, details coming soon. What are your top recommendations for Seattle?